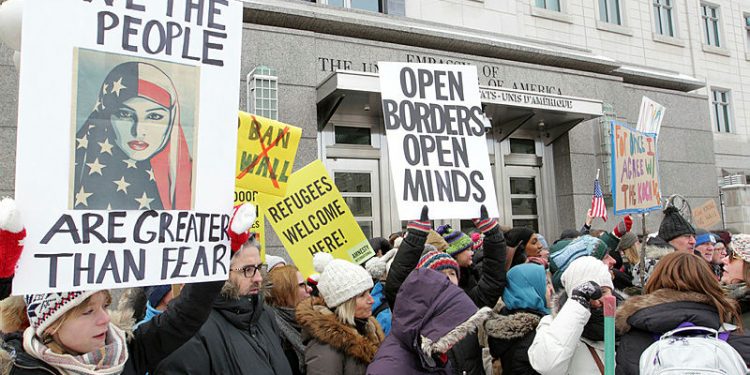 The US still unsafe for refugees

In the face of overwhelming pressure, US President Donald Trump has issued an Executive Order reversing his policy of separating migrant children from their families. While this is a positive change, the US remains unsafe for refugees.

Imagine the following scenario. Maria has survived years of horrendous domestic abuse at the hands of her husband in El Salvador. When her husband began hitting her 11-year-old daughter, Maria decided she had to leave. Maria’s husband – a member of a violent criminal gang – threatened that if she ever tried to leave him, he would kill her. Fearing for her life, Maria paid an agent to smuggle her and her daughter to the US. From there, they travelled to a Canadian border crossing and requested refugee protection.

So, if Canada hears Maria’s refugee claim, and if she can show both that her story is credible and that El Salvador is unable or unwilling to protect her, she will get refugee protection — and she and her daughter will be eligible to apply for permanent residence and eventually citizenship.

Unfortunately, however, due to the Canada-US Safe Third Country Agreement, Maria will not be allowed to make a refugee claim in Canada. Instead, Maria and her daughter will be turned back to the US.

Because of “Zero Tolerance” policies, Maria will be detained by US authorities and criminally charged for immigration law violations. Under Trump’s new Executive Order, Maria and her daughter will be detained indefinitely together. But much remains uncertain about their detention. A US court decision prohibits detention of minors for more than 20 days, but the Executive Order will not allow migrants like Maria to be released – so no one knows what will happen after 20 days of detention.

At any rate, even if Maria is not separated from her daughter, Trump’s Zero Tolerance policies violate international law, which prohibits penalties on refugees for irregular arrival and which says that children should not be detained except as a measure of last resort.

In addition, last week the US announced that survivors of domestic or gang violence will no longer be eligible for asylum. In announcing this change the US asserted that women facing domestic violence are not refugees but are instead merely victims of private criminal actors.

This announcement trivialized gender-based violence. It demonstrated ignorance of the role of the state in creating conditions in which such violence flourishes.

The announcement also ignored international guidelines issued by the UN Committee on the Elimination of Discrimination against Women about the need for all states to take gender-based violence seriously in refugee policy. Moreover, it disregarded guidelines put in place by the UN High Commission for Refugees about gender-related persecution.

The premise of the Safe Third Country Agreement is that both Canada and the US are safe for refugees – that both countries respect international refugee law and that a person who would obtain refugee protection in Canada will similarly be protected in the US.

That is clearly not the case for Maria. Instead of obtaining refugee protection in Canada and eventually becoming a Canadian citizen, in the US she will be detained, possibly separated from her child, and certainly deported to El Salvador where her abusive husband may kill her.

Prime Minister Justin Trudeau, to his credit, regularly calls himself a feminist. He espouses policies to enhance gender equality and tackle gender-based violence. Also to his credit, Trudeau emphasizes that – unlike the US – Canada continues to welcome refugees.

So why is Trudeau’s government sending women like Maria to a country that will refuse them asylum and punish them for seeking protection by putting them and their children in jail, and deporting them to horrific violence or even death?

Deepa Mattoo is the Legal Director at the Barbra Schlifer Commemorative Clinic, a specialized clinic in Toronto for women experiencing violence. Sean Rehaag is an Associate Professor at York University’s Osgoode Hall Law School, specializing in immigration and refugee law.

Dr Lavell-Harvard to Receive Spirit of Barbra Schlifer Award
May 15, 2018

Violence Against Women is an International Concern
May 2, 2016
Leave Comment