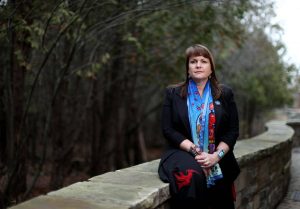 Toronto: May 9, 2018 – The Barbra Schlifer Commemorative Clinic is proud to announce Dr Dawn Lavell-Harvard as the 2018 Spirit of Barbra Schlifer Award recipient. The Award, sponsored by Torys LLP, is given annually to a woman whose work is dedicated to improving the lives of women experiencing violence.

Dawn is the Director of the First People’s House of Learning at Trent University. Previously, she was the President of the Native Women’s Association of Canada (NWAC), where she played an instrumental role in the appointment of an independent commission to investigate the disproportionate rate of violence against Indigenous women.  Along with her colleagues, she led a tireless campaign to raise national attention and pressure on the federal government to recognize and act on the disparate number of indigenous women who had either gone missing or had been murdered. Her persistence, while presiding at NWAC, culminated in the launch of a national inquiry into Canada’s missing and murdered Indigenous women.