The Clinic actively engages with the media to ensure the public and our community is aware of our position on gender-based-violence and what we are doing to prevent and resolve violence against women locally, nationally and globally.

Click to learn more about Clinic news and events

Let’s Blog About It 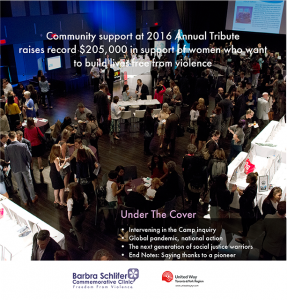 Much has been happening at the Barbra Schlifer Clinic. Find out who we have hired, who we’ve said farewell to and learn about some of the initiatives we have been involved in over the past few months.

TORONTO, November 20, 2017 — The Barbra Schlifer Commemorative Clinic has joined as a plaintiff in the ‘unfounded’ lawsuit against the London Police Service (LPS) for its discriminatory investigation and dismissal of sexual assault cases between 2010 – 2017. We base our claim on our multi-decade experience of the ongoing and systemic discrimination sexual assault survivors face when seeking legal redress for sexual assault. We join the two individual claimants in demanding fundamental change as to how the London Police Service handles sexual assault crimes, based on our expertise as Canada’s only gender-based violence, multi-service clinic.

Thursday, July 20, 2017 – The Barbra Schlifer Commemorative Clinic is disheartened by today’s decision of the Ontario Superior Court of Justice overturning the guilty verdict in the sexual assault trial of Mustafa Ururyar.

The trial judge convicted Mr. Ururyar on July 21, 2016. Both Ms. Gray and Mr. Ururyar testified at trial. After extensive cross-examination, the judge found Ms. Gray’s account of the sexual assault to be credible and was satisfied beyond a reasonable doubt that the assault had occurred as she described it. The Superior Court’s decision to allow Mr. Ururyar’s appeal of this verdict and set aside his conviction on grounds related solely to deficiencies in the trial judge’s explanation for his conclusions represent a failure in the system for Ms. Gray.

Toronto, Tuesday, May 9, 2017 – The Barbra Schlifer Commemorative Clinic is proud to announce Loly Rico as the 2017 Spirit of Barbra Schlifer Award recipient. Loly is the co-director and founder of FCJ Refugee Centre and an undisputed leader for the rights of refugee women facing violence. The Award, sponsored by Torys LLP, is given annually to a woman whose work is dedicated to improving the lives of women experiencing violence.

Toronto, April 3, 2017—The Barbra Schlifer Clinic applauds the decision of Ava Williams to launch her constitutional challenge to the London Police Services.

The Clinic has read the statement of claim and supports Ms. Williams and her lawyers in their pursuit of the individual and social remedy for the personal and systemic breach of Charter rights her case represents.

TORONTO, March 10, 2017 —The Barbra Schlifer Commemorative Clinic and WAVAW Rape Crisis Centre are relieved at the news of Justice Camp’s resignation as a member of the Federal Court of Canada.  As the Front Line Interveners in the disciplinary proceeding representing countless women survivors of sexual assault, we agree with the Canadian Judicial Council’s (CJC) comments that Justice Camp’s conduct was “manifestly and profoundly destructive” to the impartiality and integrity of the bench.

The Barbra Schlifer Commemorative Clinic and the Gardiner Museum have partnered for more than a decade to offer women who have survived all forms of violence with an Expressive Arts Therapy Group. Led by art therapist Suzanne Thomson and ceramic artist Jessica Cooper, the Group’s participants will share their work and raise public awareness about violence against women in a sensitive, informed and compelling art exhibit that will open on December 6, 2016, at the Gardiner Museum.

Canada held to account for its disappointing women’s rights record by the United Nations Committee on the Elimination of Discrimination against Women: Joint Statement by Canadian Civil Society Organizations

Today Canada’s record of women’s equality is under the spotlight at the United Nations in Geneva. The 65th Session of the Committee on the Elimination of Discrimination against Women happens at an opportune moment for Canadian women. Canada has a new federal government with a Prime Minister who says he is a feminist, calls for a nation-to-nation relationship, and acknowledges that “poverty is sexist”. We know words matter, but now we need action.