TORONTO: Thursday, May 16, 2019 – The Barbra Schlifer Commemorative Clinic is excited to announce this year’s Annual Tribute master of ceremonies is the well-known and deeply cherished award-winning journalist, and broadcaster Angie Seth. 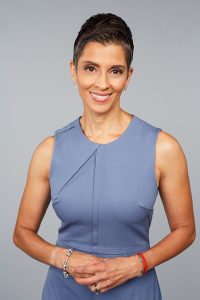 “We are overjoyed to have Angie as our Emcee,” says Deepa Mattoo, the Clinic’s executive director. “I have known Angie for several years as a member of the South Asian community. Her passion as an advocate for women’s rights makes her a natural fit as the Annual Tribute Emcee.”

In addition to being a Canadian journalist icon, Ms. Seth is also well known as a vocal advocate for gender equality, a defender of human rights and as a dedicated supporter for the prevention and eradication of violence against women.

“Deeply rooted in gender inequality, violence against women and girls is a global pandemic that affects 1 in 3 women in their lifetime. In 2014, slightly more than 1.2 million women in Canada reported incidents of violence.  The Barbra Schlifer Commemorative Clinic provides women with essential wrap-around services critical to overcoming the consequences of violence.  Beyond these services, the Clinic is also deeply involved in law reform and policy initiatives to prevent gender-based violence, both in Canada and internationally, which is genuinely important to me. I am proud to be this year’s emcee and to be associated with an organization so intently focussed on eradicating gender-based violence.” Angie Seth, CTV News Channel

“Last year, the Clinic provided assistance to 9,000 women,” says Mattoo. “In our 2016/2017 fiscal year, the Clinic supported 4,700 women, in 2017/2018 that number rose to 7,000 women representing a 49 percent increase. This year, the number of women the Clinic assisted rose again to 9,000 — a 91.5 percent increase over two years. Each year, the demand for our services continues to exceed our resources. To meet the rise in this demand, we must raise $250,000. With the support of those who understand the vital role the Clinic plays, I am confident we will achieve this goal.

Prior to joining CTV News Channel, Seth anchored Global News’ weekend broadcasts. For more than 13 years, Seth was the face of OMNI Television’s South Asian News where she covered world events including the assassination of Pakistani Prime Minister Benazir Bhutto and the 2008 Mumbai terror attacks.

Seth launched her broadcasting career as a reporter for OMNI Television upon graduating from the University of Toronto with an honours bachelor’s degree in Political Science, English, and Philosophy. During her tenure at OMNI, she led coverage on top stories such as the 9/11 terror attacks and the Air India trial in Ontario. She also hosted and produced two entertainment programs, ISHTYLE TV and BOLLYWOOD BLVD.

In 2013, Seth joined CBC Radio as a freelance news anchor while maintaining her parenting blog, masalamommas.com. She also had her own column entitled Out and About with Angie Seth for Desi News Magazine, from 2013-2018.

Seth is a strong advocate for women’s rights, children’s rights, and the fight against domestic violence. She worked on a two-year project from 2014 through 2016 with the South Asian Women’s Centre and maintains a positive and unwavering presence in the community.

Seth has won several awards, including the Edward Murrow Award for Innovative Journalism in 2018 for MultiMarket Content, and the Queens Diamond Jubilee Medal in 2012 for her work as a journalist and her contributions to the community.

Seth is a long-distance runner and has participated in five marathons, including the Boston Marathon in 1999. Seth lives in Toronto with her husband and three children.

About the Barbra Schlifer Clinic

The Barbra Schlifer Commemorative Clinic is a specialized clinic for women experiencing violence, established in the memory of Barbra Schlifer – an idealistic young lawyer whose life was cut short by violence on the night of her call to the bar of Ontario on April 11, 1980.  In her memory, the Clinic assists approximately 9,000 women a year to build lives free from violence through counselling, legal representation, and language interpretation. Since opening in 1985, the Clinic has assisted more than 65,000 women.

About the Annual Tribute

Hosted by Blakes LLP, the Annual Tribute is celebrating its 25th anniversary as the Clinic’s signature fundraising event. Each year, more than 500 dedicated supporters of social justice gather as an opportunity to support both the Barbra Schlifer Commemorative Clinic and the women who call on the Clinic seeking our legal, counselling and interpretative services.

We need your support

Our doors are open to women experiencing violence during COVID-19. Please join our partners and help us raise $180,000+.